The US deficit is growing out of control. Inflation is at a forty-year high. You have a voice in this process. Take action to ‘Let U.S. Vote!’

According to the CBO’s 2021 Long-Term Budget Outlook, growing deficits are forecast to expand federal debt dramatically over the next 30 years. As borrowing increases, payments on the debt are projected to “more than triple in relation to the size of the economy,” and to surpass discretionary spending by 2031. If current law remains unchanged and federal debt continues to rise as predicted, the CBO anticipates suppressed economic output, reduction in U.S. household income, the increased likelihood of an economic crisis, and less fiscal space for policymakers to respond to national challenges.

According to Jeb Hensarling, former US Representative and Chairman of the House Financial Services Committee, the inflationary conditions plaguing the American economy are directly related to the rapidly expanding national debt. Rep. Hensarling explains that the Federal Reserve financed recent trillion-dollar deficits by purchasing Treasury debt, and then simply adding a new set of credits to its books.” Because of the additions of these credits,” Hensarling said, “in two years the Fed’s balance sheet has doubled to almost $9 trillion, creating a risk of significant and sustained inflation.”

However, the soaring inflation rate over the last year is just the latest symptom of an underlying debt crisis. Hensarling points to a debt to GDP ratio of 119%, a threat to the dollar as the world’s reserve currency, as well as underfunded and failing trust funds like Medicare Part A and Social Security which will run out of money in 2026 and 2033 respectively.

Compounding the problem is the fact that the interest rate hikes needed to control inflation will increase the costs of servicing the national debt to above $1 trillion a year. That’s a trillion dollars in taxpayer money for which Americans get nothing. A trillion in funds that could have been spent on national defense, revitalizing Social Security, or response to national emergencies.

“We’ve had years of denial, delay and neglect in confronting the unsustainable national debt,” said Hensarling. “Today’s high rate of inflation is simply a foreshadowing of what could come if the U.S. is forced to monetize the bulk of its national debt. Reduced economic growth, a diminished national defense, insolvent social safety-net programs and recession loom as well.”

How You Can Take Action

In recent polling, a bipartisan 86% of Americans across five states from California to Kentucky indicated that they want the right to vote on a Fiscal Responsibility Amendment to the U.S. Constitution. If you agree with them and would like to let your elected representatives know that to get your vote, they need to let you vote for a Fiscal Responsibility Amendment, you can reach them with a single click by scanning or clicking on our QR Code and entering your contact information. You’ll also have the opportunity to expand the reach of our message by sharing the campaign on social media. Thank you for taking a moment to inform your representatives about the constitutional action that can restore national security, Social Security and the American Dream for generations to come. 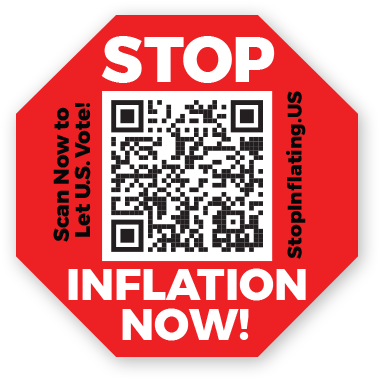 The American People call on Congress to Co-Sponsor a Resolution stating:

1. “NOW, THEREFORE, BE IT RESOLVED That the Congress of the United States hereby calls an Article V Convention for Proposing Amendment(s) that would impose fiscal restraints on the federal government, and that this Convention shall be held in [PLACE] during 2022.

2. “BE IT FURTHER RESOLVED That any proposed amendment(s) imposing fiscal restraints on the federal government be ratified by a vote of We the People in three-quarters (38) of the states via state convention delegates who shall ‘have no ground for reversing the vote of millions of [their] citizens’” (CHIAFALO v. WASHINGTON).”

All Sides Agree: A Fiscal Responsibility Amendment is