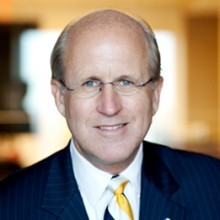 David M. Walker is a nationally and internationally recognized expert in government transformation and fiscal responsibility.

He has over 40 years of executive level experience in the public, private and non-profit sectors, including heading three federal agencies, two non-profits, including serving as Comptroller General of the United States and CEO of the U.S. Government Accountability Office (GAO) from 1998-2008. He has also served on many non-profit boards and advisory committees, including serving as a Public Trustee for Social Security and Medicare, and as a member of the Defense Business Board.

Mr. Walker is also a writer, speaker, and media commentator. He is the author of four books and has been featured in several nationally syndicated programs and documentaries. Mr. Walker recently completed serving as the Distinguished Visiting Professor (William J. Crowe Chair) at the U.S. Naval Academy where he taught the Economics of National Security. The Balanced Budget Amendment needs your voice!
Make Your Choice!